Basilica, Catacombs of San Giovanni and Crypt of San Marciano

Basilica, Catacombs of San Giovanni and Crypt of San Marciano

The Basilica of St. John the Evangelist was built in the 6th century by the Byzantines on a crypt dating from the 1st century AD. It is of great importance both for its architectural aspect (as it was the largest building built in Syracuse) and because its memory is related to the origins of the Christianity in the city. For a long time this church was identified with the ancient cathedral of the city and here were built the catacombs probably because it was the burial place of St. Marciano, first bishop of Syracuse.he church was built so that the burial of the saint was aligned with the altar, located in the center of the nave. The church was composed of three naves with twelve Doric columns, six on each side, which alluded to the number of apostles, now all that remains are just a few remnants of columns in the nave, the stone apse and the entire west facade.
During the devastation of the Arabs, the basilica was considerably damaged. In the 12th century it was rebuilt by the Normans who reused the materials of the tempio di Demetra e Kore, of which no trace remains today. The orientation of the building was changed, the perimeter walls were rebuilt, the columns were reduced to ten and the presbytery assumed its current proportions. After the earthquake of 1693 the entire church was subject to further damage and later, in 1705, was restored and the facade, which was originally located to the west, was facing south, the arcade was equipped with pointed arches, adorned with decorated capitals. When the 1908 earthquake struck, the roof collapsed and was no longer restored.

From the basilica of San Giovanni, a staircase to the right of the entrance allows access to the Byzantine crypt, located approximately five meters below street level. According to Christian tradition, the crypt was built on the site where St. Marcianus, the first bishop of Syracuse, was buried. He was sent by St. Peter in 39 AD to preach the Gospel and founded the first Christian community in the Western world. The cave that welcomed his body immediately became a place of devotion and of burial. Some apses, the remains of the pavement, as well as numerous columns and Ionic capitals are still visible from the ancient structure. The Normans further adorned the crypt, setting four marble capitals representing the symbols of the Evangelists at the corners of the central nave, and covering the rocky wall with frescoes and decorative motifs. 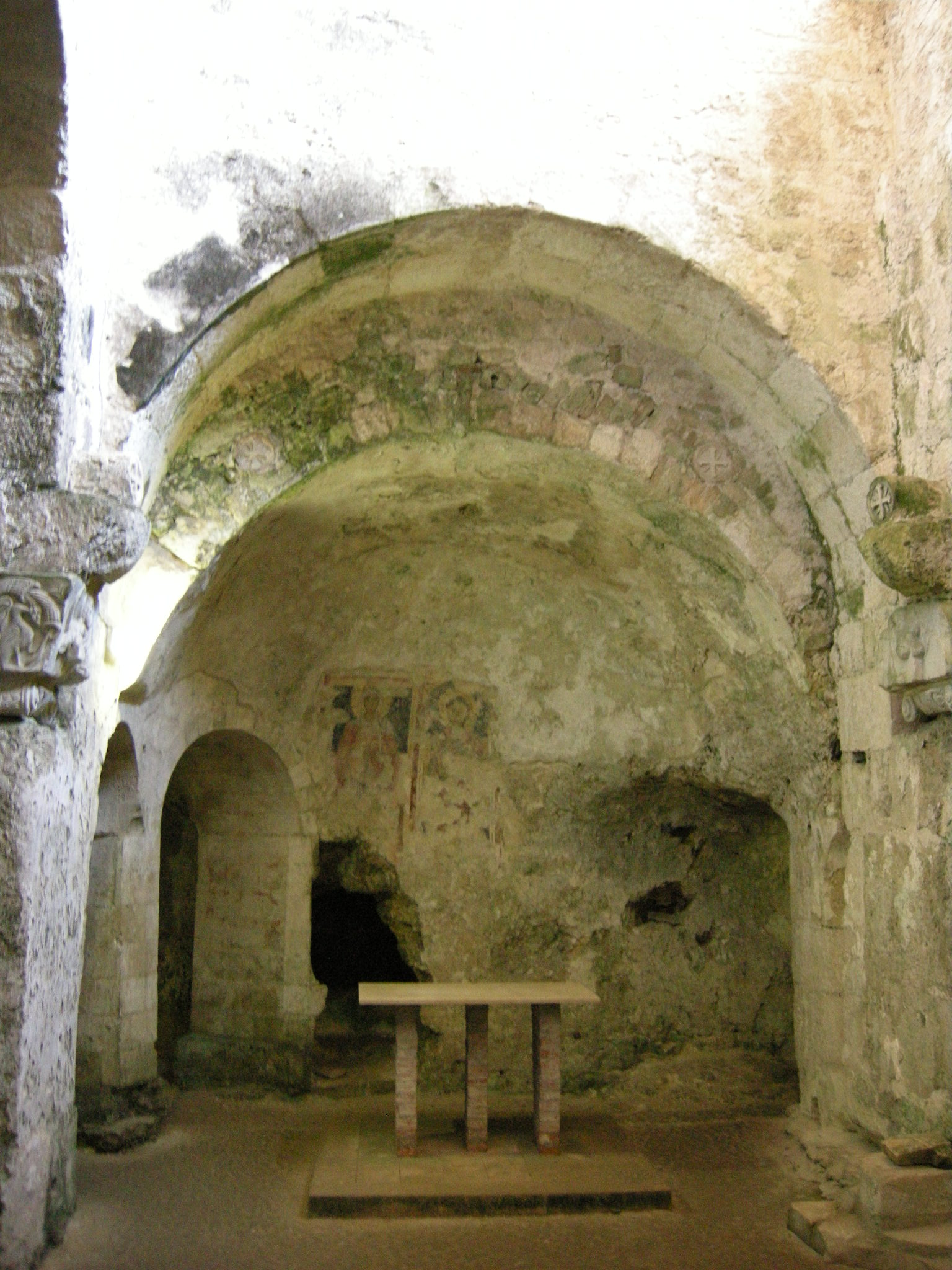 The catacombs of St. John are located in the area below the basilica and represent an important underground heritage dating back to the early Christian period. Built in the 4th century and extended until the 5th century, and not yet fully explored, the Catacombs of St. John follow the layout of a former Greek aqueduct (traces of which can be seen on the vault) and are structured according to a system of regular tunnels that follow that of the “castrum”, the typical Roman military camp. There is in fact a central gallery, the “decumanus maximus”, from which ten secondary galleries branch off. The latter lead to four roundabouts (former aqueduct tanks): the Antioch roundabout, the Marina roundabout, the Adelfia roundabout and the Sarcophagi roundabout. There is also a last small rectangular tank called “Eusebio’s cubicle”. The walls of the galleries are marked by numerous rectangular loculus with their long side closed originally by a slab of marble, bricks or tiles. They were mainly individual tombs, but the ” arcosoli polisomi” were also common, galleries with arched entrance carved into the rock that could contain from two to twenty bodies, they were in fact tombs for families or guilds.
The Catacombs also owe their fame to the splendid sarcophagus of Adelfia, discovered in 1872 and now conserved in the Paolo Orsi Archaeological Museum in Syracuse. 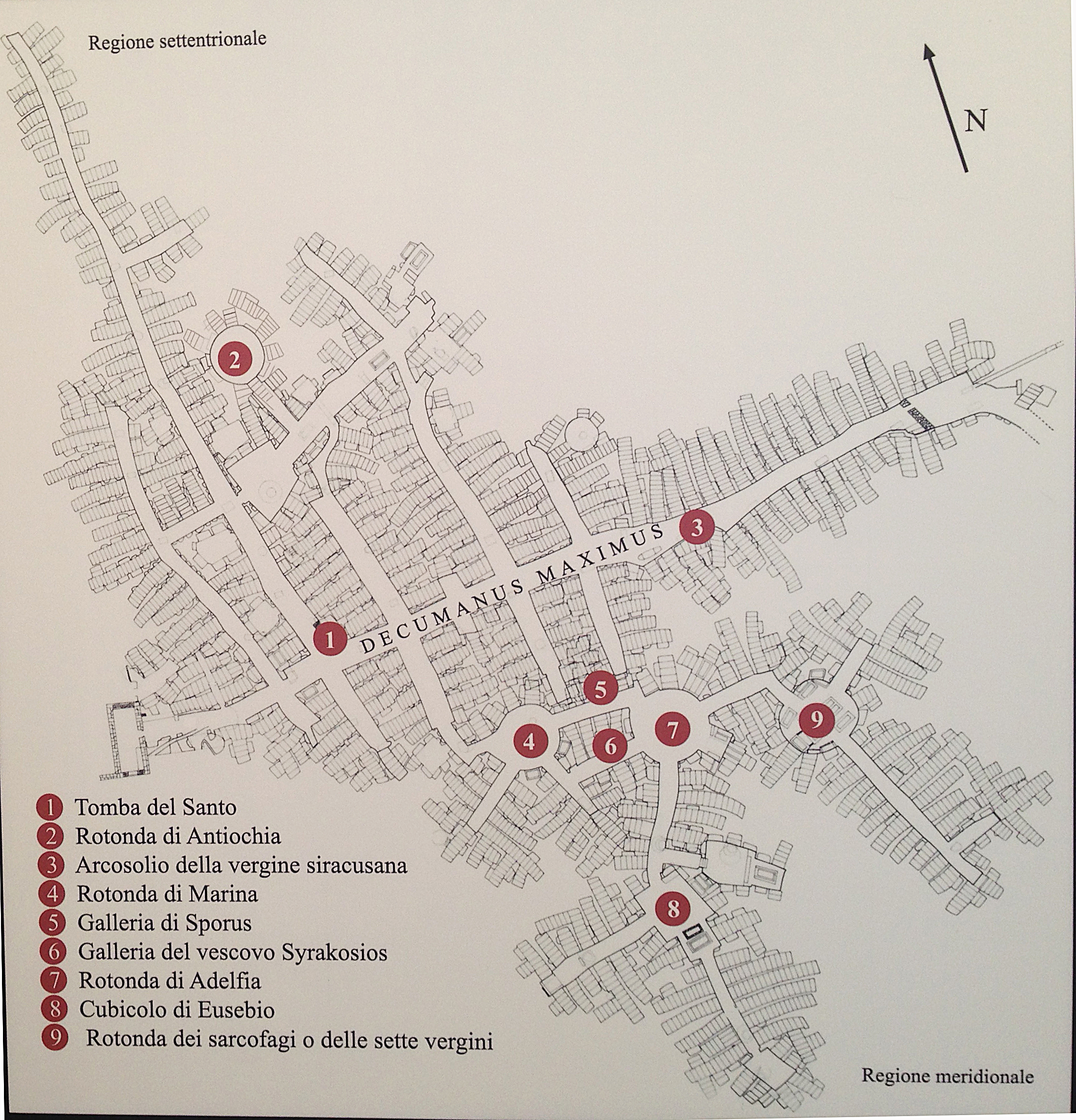 DAY OFF DURING WINTER SEASON: MONDAY